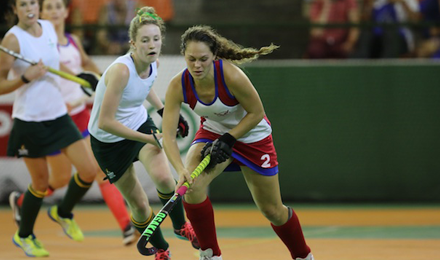 The Namibia Hockey Union (NHU) on Thursday received a major sponsorship of more than N$1 million for a period of three years.

Yesterday, Seaflower handed over a sponsorship of N$890 400, on top of the N$120 000 that they had already sponsored for the Test series against South Africa in August in Durban.

The president of the NHU, Marc Nel, thanked both companies for their support, saying their aim was to qualify for the 2018 Indoor World Cup.

“I want to thank Seaflower for their belief in women’s hockey – to receive a sponsorship of more than a million dollars is just unbelievable. They already sponsored our Test series against South Africa in Durban in August, while the sponsorship will include our preparation for next year’s African qualifiers for the Indoor World Cup, and then when we hopefully qualify, for the 2018 Indoor World Cup in Argentina as well,” he said.

Innocencio Verde, the general manager of the Seaflower Group of Companies said they were impressed by the national women’s team’s results and the transparent manner in which they conducted their affairs.

“We decided to sponsor them because of the results that they have achieved, while the management was very transparent in their dealings with us. Since we started sponsoring the team their indoor world ranking has improved from 17 to 14 while they are also ranked second in Africa,” he said.

Ricardo Gustavo of Investec said they were proud to sponsor hockey in Namibia.

“We understand the challenges that sport faces globally, so we feel we need to support the growth and development of sport in Namibia. We are excited by the performances of our women’s hockey team and we are happy to continue engaging with the NHU to see how we can support sport at a national and developmental level,” he said.

The deputy minister of sport Agnes Tjongarero thanked Seaflower and Investec for their support.

“We are delighted that Seaflower and Investec have dedicated themselves as partners to the NHU, because the government is facing challenging times and needs the support of the private sector. I urge the NHU to make sure that the money is well spent and that we qualify for the World Cup,” she said.

South Africa won the last series between the two countries, in Durban in August, when they won three tests, drew one and lost one.

The Namibian team that will compete against South Africa was announced and is as follows:

Erwin Handura is the coach and Luke Pennefather the assistant coach, while Tercia Venter is the manager.