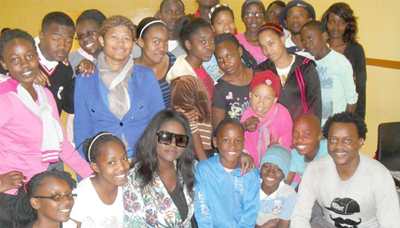 The funding for the workshop underway in Lüderitz was made through Seaflower’s subsidiary Seacope freezer Fishing (PTY) Ltd.The workshop will take place on a quarterly basis.Nghipunya said the funding is part of Seaflower commitment to social and community development in Lüderitz and //Kharas region.Nghipunya explained the aim of this workshop is to train young people in the art of acting through theoretical lectures and role-plays.The objective is to bring together a group of participants at the end of each initial workshop to form what will be called “Luderitz Theatre Project,” that will be able to put together a theatre production on a quarterly basis as sponsored.

The workshop conducted by one of the local actors and community theatre practitioners, Armas Shivute Armas, started on September 29 and it ended on October 10. Thirty-three (33) youngsters benefitted from this endeavor.During the official opening of the workshop the Mayor of Lüderitz, Suzan Ndjaleka thanked the organisers and facilitators of this project for reaching out to the youth of Lüderitz.Theatre projects are developed for the empowerment of youth, especially the unemployed but most of these projects are centred on the capital city and surrounding towns. Therefore, it is an honor for Lüderitz residents to have this exciting programme, praised Ndjaleka.“Art has become a global metaphor for the fight against violence, and in a community where these evil practices still persist, the introduction of art for the youth is evidently critical,” she further stated.Ndjaleka told the trainees she expects them to put the knowledge they will attain to practical use, and that in future they might open up a film production company in Lüderitz.